Vinko Žganec, who was born in 1890 and died in 1976, was a Croatian ethnomusicologist and an academician; he researched, collected, noted, organised, analysed, systematised and published folk songs and folklore music – both in and outside Croatia (Cf. Bezić, 1991:31).

In early 1941 he returned to Zagreb from Sombor, where he had lived and worked for several years. In Zagreb, among other things, he acted as the secretary general of the Croatian Authors Society (HAD) for which he collected folk songs (Bezić, 1998:23). In 1945 he took up the post of the head of the Department of Folk Music in the Ethnographic Museum in Zagreb, where he stayed until 1948 – when the Department ceased to exist. Thereupon, its textual and research division was moved to the newly founded Institute of Folk Art and the Collection of musical instruments remained in the Museum as it already used to exist as its independent unit up to then. 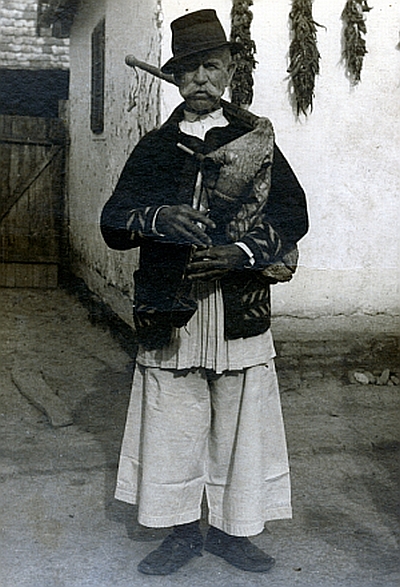 Bagpipe player, sorroundings of Vinkovci, 1946 / F-2364, Photodocumentation of the Ethnographic museumVinko Žganec was the first director of the Institute of Folk Art, and he worked there until 1964. He was more concerned with noting folk melodies than researching traditional instruments and is accordingly better known in Croatian ethnomusicology. His contribution to ethno-organology was modest, especially when compared to Širola or Kuhač, although ethno-organologist Krešimir Galin points out that Žganec’s orientation towards vocal music brought about numerous insights into musical instruments as well, which were more incidental than intended.

According to Galin such is the case with some valuable information about musical instruments which lies scattered within Žganec’s books about vocal melodies, which is why one is met with “a paradoxical situation in which one should carefully look for really valuable information about instruments and about instrumental repertoire in commentaries to particular music notations of vocal melodies or in notes about singers...” (Galin 1991:86).

During his work in the Museum, Žganec managed to enable other melographers and music experts to participate in field research and recording, but all the time he believed that the Department did not have enough experts, which considerably impeded its work (Bezić 1998:24).

From 1948 to 1966 twenty-three musical instruments were collected – by curators, documentarians, research assistants and students of ethnology (Gjetvaj 1989:24). 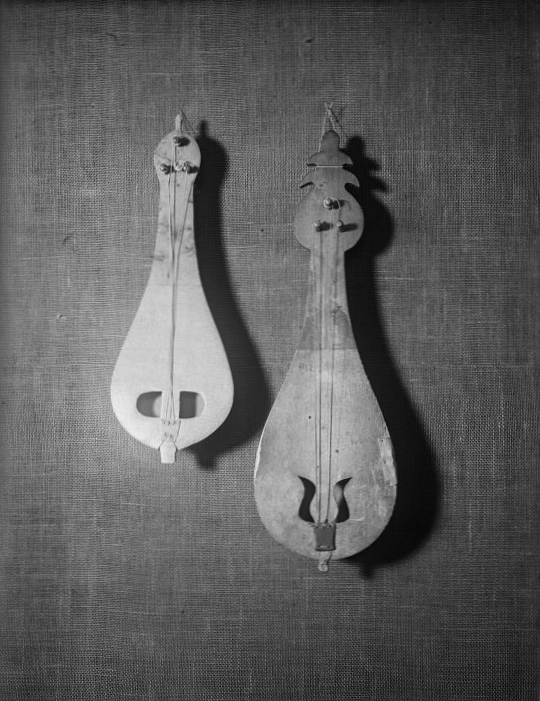 Lijerice iz Etnografskog muzeja u Splitu, snimio: Marcel Davila, rujan 1949. / N-6360, Foto-dokumentacija Etnografskog muzeja
When the Ethnographic Museum was restructured, in 1966, the Collection of musical instruments was referred to the Department of Folk Art. Between 1965 and 1972 the Museum underwent renovation – a new permanent exhibition was being launched, storage rooms and the rest of workspace were being restored, so curators had to move all the exhibits around, including musical instruments, for as often as several times a month.

As a public institution the Museum has frequently cooperated on different levels with general public, expert and non-expert public interested in the work of the Ethnographic Museum and traditional heritage which is kept, presented and published by the Museum. Musical instruments have repeatedly featured in radio and TV programs. The Collection has always been open to students of musicology and ethnology, who use the gathered information for their research.