The gajde (bagpipe) is an aerophone musical instrument which consists of several parts: a bag (air reservoir), a blowpipe (into which air going to the bag is blown), a chanter (also called gajdunica; typical Slavonian bagpipe has a two-piped chanter so it is also called dvojnice) and a drone (trubanj, berda or burdon – producing a single constant monotonous tone, Et 23959. The more reeds there are, the richer the sound of the bagpipe is – thus the Slavonian bagpipe has been preserved as a solo instrument.

The bag was mostly made of kid or sheepskin, while there are also reports about pig, calf and even dog skin being used for the same purpose. With older types of bagpipes even the animal’s head and horns were sometimes used. Animal skin was tanned and it was turned inside out. The blowpipe, the chanter, and the drone were fitted in, tied with a cord and further attached to three holes using wax or pitch. They were made of various kinds of wood: maple, common maple, walnut, etc. The chanter, also called dvojnice in Slavonia, is most commonly made of maple wood and it has finger holes. Reeds were most often made of cane or elder wood and were inserted into the chanter. Bees wax was used for tuning – it was applied to an edge of a finger hole, or it was used for securing different parts of the instrument.

“If the reed sits too tightly, so that it cannot vibrate and no sound is produced, the bagpipe player inserts a hair of his own head. This is why folk used to say that a bagpipe player is tearing his hair out in despair if the reeds are not right” (Kuhač, 1877: 46). A curved wooden piece that extends onto the chanter is called horn and its function is to amplify the sound of the bagpipe. Drones (trubanj, berde or burdon) do not have any finger holes and produce only a single tone. The chanter and the drone are often lavishly decorated – carved or tinned. 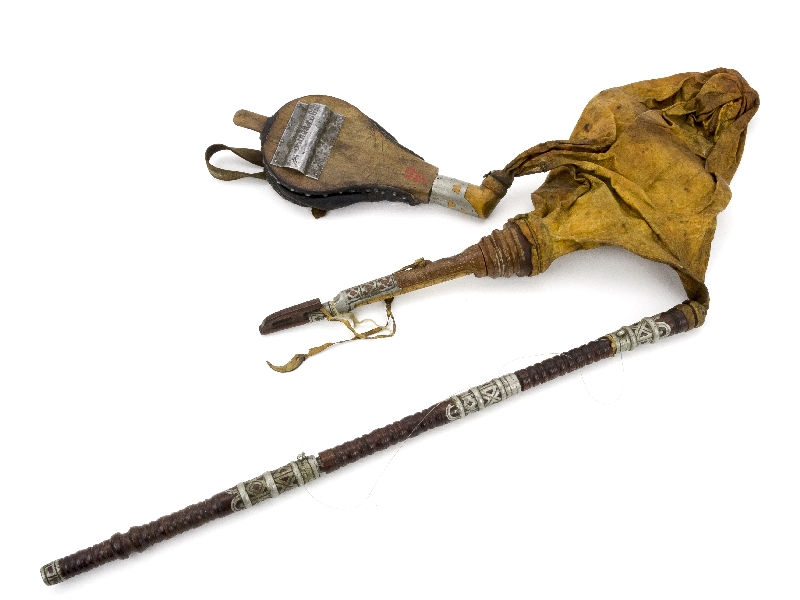 In Croatian territory bagpipes were widespread in Slavonia, Baranya and Posavina. They were longest used and preserved in Slavonia. According to Franjo Ksaver Kuhač the bagpipe player (gajdaš) featured prominently in typical Slavonian wedding celebrations in the past – being present from the very beginning until the end. “As soon as a young man decided to propose to a girl, upon settling it with his friends, he would send his representative to ask for the girl’s hand in marriage and a bagpipe player to her house. If the answer was affirmative, the girl’s family would celebrate her engagement soon after – with the presence of a bagpipe player. If finally the wedding day transpires, the bagpipe player accompanies guests on their way to the bride”. (Kuhač, 1877: 55)

The bagpipe as a folk instrument was not exclusively played at various folk festivities, but it had its role in celebration of Christian holidays as well, thus Kuhač states: “Every festivity requires a bagpipe player if it is to be merry; even when one of the most joyous Christian holidays is celebrated, such as Christmas, the church resounds with the sounds of bagpipes” (ibid.). Bagpipe players were the very persons who enjoyed the highest prestige among all musicians in Slavonian villages as late as the early 20th century. However, before long they were overshadowed by tamboura bands of ever-growing popularity and the tamboura has become the typical and most widespread Slavonian instrument ever since (Marošević, 2001: 415).

Dude (the shepherd’s pipe) is an instrument very similar to the bagpipe. It was once played in Podravina, around Bjelovar, Križevci and Koprivnica. It is distinguished by the so called laktača (an additional bag used for pumping the air into the main bag) and three or four reeds which amplify the sound of the instrument when playing, (POH-429/1920). Dude does not have a horn, which might be part of the bagpipe, and its chanter also differs.

The bagpipe
Sv. Nikola, the second half of the 19th century

The bagpipe
Livno, the first half of the 20th century

The bagpipe
Komletinci, the 2nd half of the 19th century

The dude, drone pipe and sufra
Kapela, Bjelovar, the 1st half of the 20th century

The dude
Rovišće, Bjelovar, the 1st half of the 20th century

The dude
unknown site, the 1st half of the 19th century