There are over fifty items of diple in the Museum’s holdings. Diple consist of two pipes with finger holes and a single reed of the clarinet type. They are mostly made of maple wood (Et 1199).

They were once widespread in the whole of Dalmatia and today they are kept in the Dalmatian hinterland, northern Dalmatia and some of the islands (such as Korčula) (Marošević, 2001: 420). 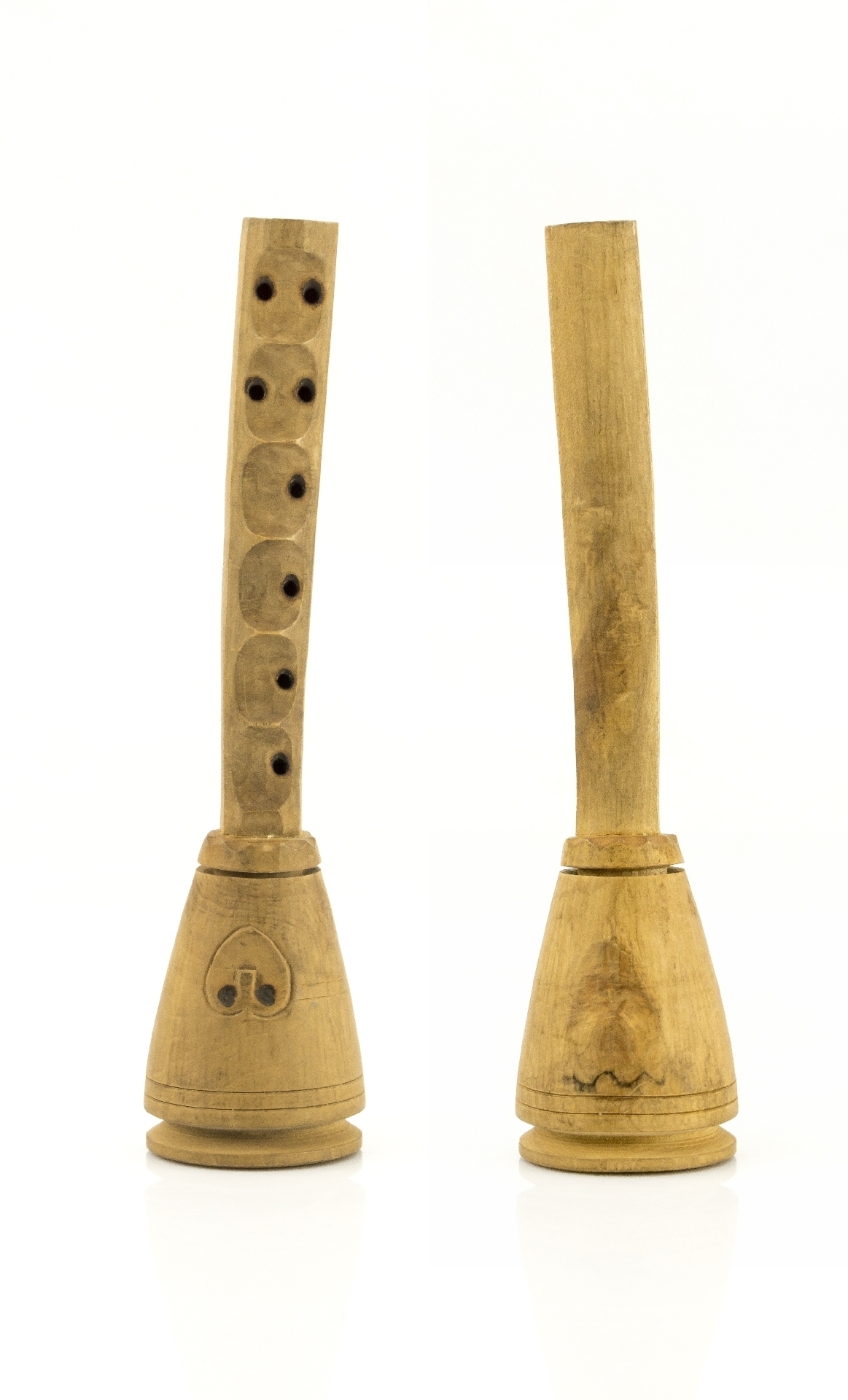 The diple, Zelovo, Sinj, middle of the 20th century / Et 18447, The Collection of musical instuments

During the 20th century the making of the diple with kutla developed to the extent of proper cottage industry in some parts of Dalmatian hinterland, for instance “…Zelovo in Sinjska Krajina, high in Svilaj mountain; Otišić in Vrlička Krajina (…); Komazeci neighbourhood in the village of Žegar, in the basin of Zrmanja…” (Širola, 1937: 89). The largest number of diple in the Collection of musical instruments comes precisely from the areas mentioned above.

Širola believed the origin of diple to be in distant past and that this type of instruments was widespread all over Europe since as early as the Classical period (Širola, 1937: 4). In our region two types of diple have been preserved: diple (double-reed flutes of the clarinet type) and diple jedinke or single-pipe diple (single-pipe flutes with a clarinet-like reed and a cylindrical bore or stock) which were used as children’s instruments (they form part of the Museum’s Collection of traditional children’s toys) and as folk musical instruments of herdsmen. 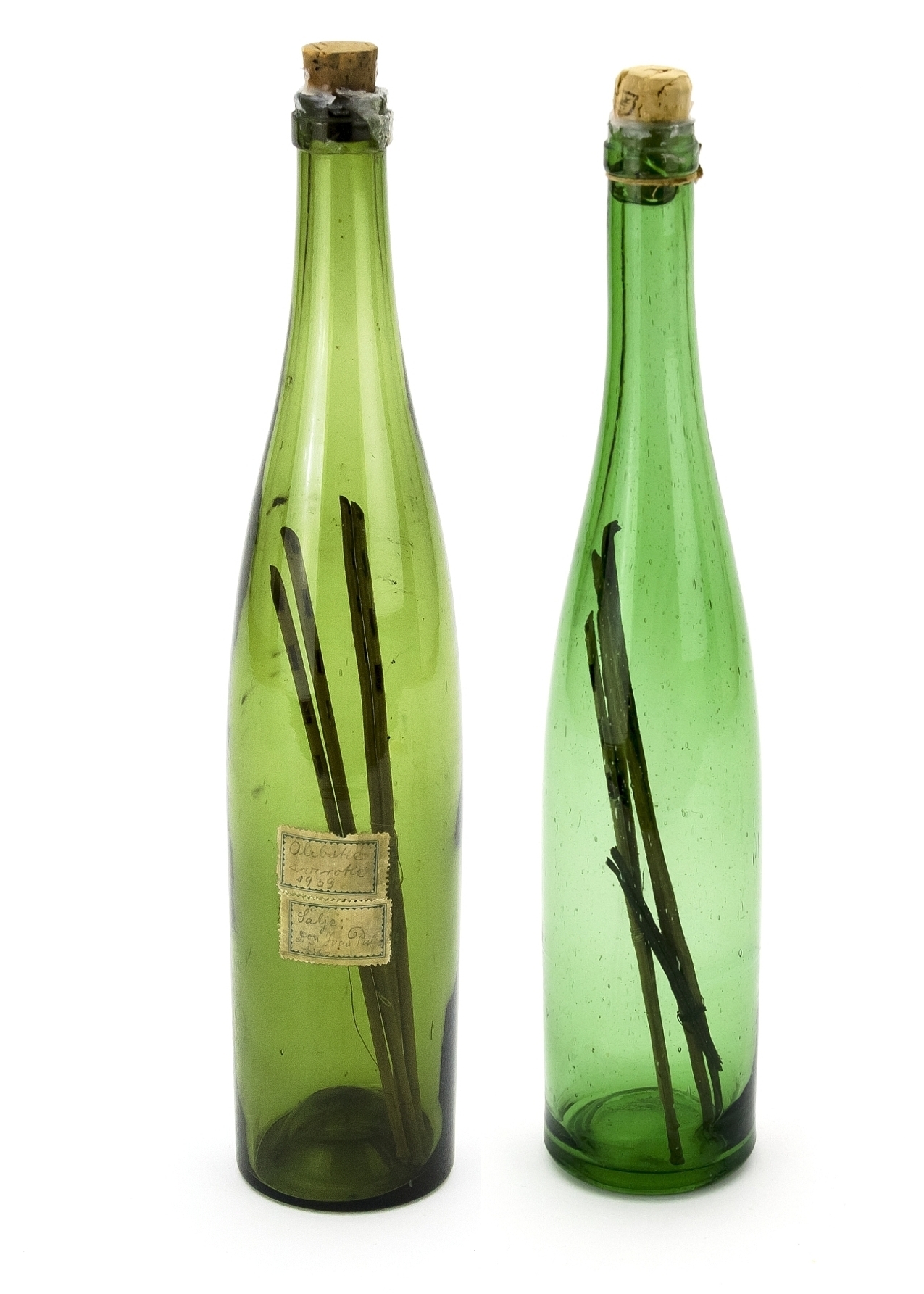 Flutes from the island Olib, made from oat in the bottle (Olibske sviroke), Olib, 1st half of the 20th century / Et 49734ab, The Collection of musical instruments

According to Širola flutes that represent the so called “transitional form” (made from straw, goose quill or gourd leaf stalk and thus having short life span) carry immense importance for the development of clarinet-type flutes and deserve consideration accordingly. An example of the mentioned type of instruments are the sviroke “made from oat, wheat or rye on the islands of Olib and Silba...”, which are played exclusively by women.

One other component worth mentioning is the ornament on the front side of kutla which Kuhač tied to Slavic pagan mythology stating that “it is worth noting that diple players may sometimes mention some kind of a god of diple. No player has ever told me his name since they dare not to take it in vain, except when in dire predicament or at the beginning of a great festivity. According to Marko Kačunić [whose diple are included in the Collection of musical instruments] their God can be seen on most diple” (Širola, 1937: 24); (Et 9026, Et 8841, Et 9928, Et 9931).

Diple can either be played on their own or as attached to a goat or sheepskin which serves as an air reservoir whereby a different type of musical instrument is created – mješnice, mišnice, mih  that was once played all over Istria, Lika, the Dalmatian hinterland, Dalmatian islands and Herzegovina.

The diple
Zelovo, the first half of the 20th century

The diple
Solin, Split, the first half of the 20th century

The diple
Zelovo, Sinj, the first half of the 20th century

The diple
Zelovo, Sinj, the first half of the 20th century